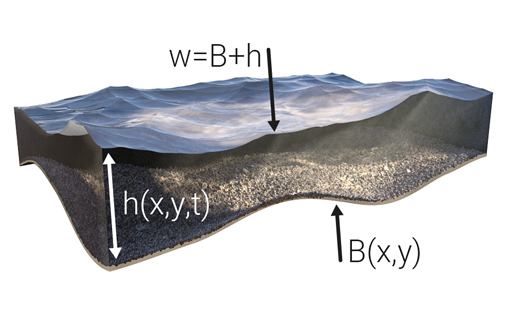 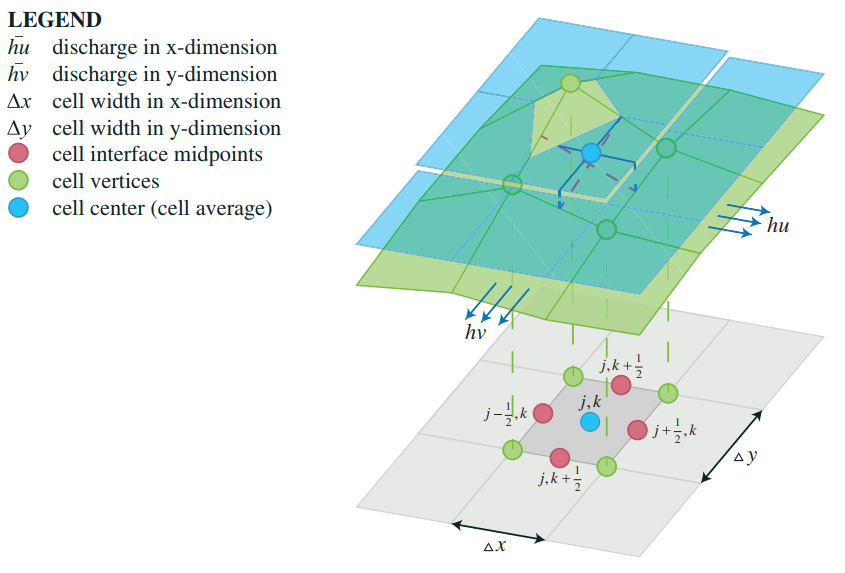 Fig. 2. A 2-D grid-based representation of average water depths, discharges and bathymetry in a case where the middle cell is fully flooded in the y-dimension, but only partially flooded in the x-dimension. Blue solid and red dashed lines denote the waterlines and bathymetry slopes in both dimensions, respectively. For a bilinear reconstruction, the cell averages coincide with the values at the cell centers, while bathymetry is approximated by its values at the cell vertices.[1]

The Water Module's primary function is simulating two-dimensional flow of water across the surface. In order to do this, the project area is first discretized into x by y cells depending on the configured grid cell size. Secondly, water is initialized in the model. Finally, a set of rules is required that describes the behavior of the flow.

In theory, each grid cell can have a unique bottom elevation and accompanying water depth, yielding a certain water surface elevation (or water level). However, in practice, water levels are often initialized for large groups of cells rather than individual cells, assuming that each (water level) area in a project has been assigned a water level. During the initialization phase a distinction is made between two types:

For all water terrains in a water area, the volume of water per grid cell is such that the resulting water level at those locations conforms the value of the WATER_LEVEL attribute as provided by the corresponding water area.

If a grid cell is neither part of any water area nor inundation area, or the assigned water level is lower than its bottom elevation, the water depth is assumed to be zero and the water level becomes equal to the bottom elevation. In turn, this bottom (or surface) elevation is equal to the elevation model, though it may be altered by the presence of a construction or the BREACH_HEIGHT attribute of a breach.

In the model, imbalances in the water surface elevation across the grid drive the flow of water until a state of equilibrium is reached in terms of h and flux. Behavior of the flow is described by a second-order semi-discrete central-upwind scheme produced by Kurganov and Petrova (2007)[2], which is based on the 2-D Saint-Venant equations (a.k.a. shallow water equations):

This scheme deviates from the original Saint-Venant equations in that it approaches the system in terms of water surface elevation (w = h + B) and flux (hu and hv), instead of just the water depth (h). The conceptual image in Fig. 1 aims to clarify on the various terms in the model equations. This method relies on a continuous piecewise linear approximation of the surface, which is further explained on this page.

This scheme is further extended with the shoreline reconstruction method by Bollerman et al (2014), which ensures better numerical stability at the wetting and drying fronts of a flood wave[3]. An elaborate explanation is provided by Horváth et al. (2014)[1].