An elevation model (or DEM, Digital Elevation Model), is a model representation of terrain heights; the quantitative measurement of vertical elevation change in a landscape. On a small scale, differences in terrain height can affect shade and water distribution. On a larger scale, terrain height has an effect on weather and climate patterns.

Implementation in the Tygron Platform

The elevation model (also referred to as DEM) in the Tygron Platform is a 2-dimensional grid with values indicating the terrain height in meters relative to datum. Terrain in this context meaning the soil and the subsurface.

The 3D World visualizes the elevation model inherently as the bottom plane upon which all other features, such as Constructions, are placed. Changes in terrain height are similarly changes in the height of that plane.

In the Tygron Platform, the elevation model offers terrein heights representation as both a DTM (Digital Terrain Model) and as a DSM (Digital Surface Model). A DTM represents the bare ground surface without any objects like plants and buildings. In contrast; a DSM represents the earth's surface including all objects (e.g. houses, trees, etc.) on it. This means features such as Constructions are explicitly not a part of the DTM, but are a part of the DSM. In locations with water, the elevation model follows the bottom of the water body for both the DTM and the DSM.

The 3D World visualizes the elevation model inherently as the bottom plane upon which all other features, such as Constructions, are placed. Changes in terrain height are similarly changes in the height of that plane.

The elevation model consists of a single dataset, which is generated when a Project is first created. Any changes to the elevation model are applied directly to that dataset, including manually drawn changes as well as imported changes. 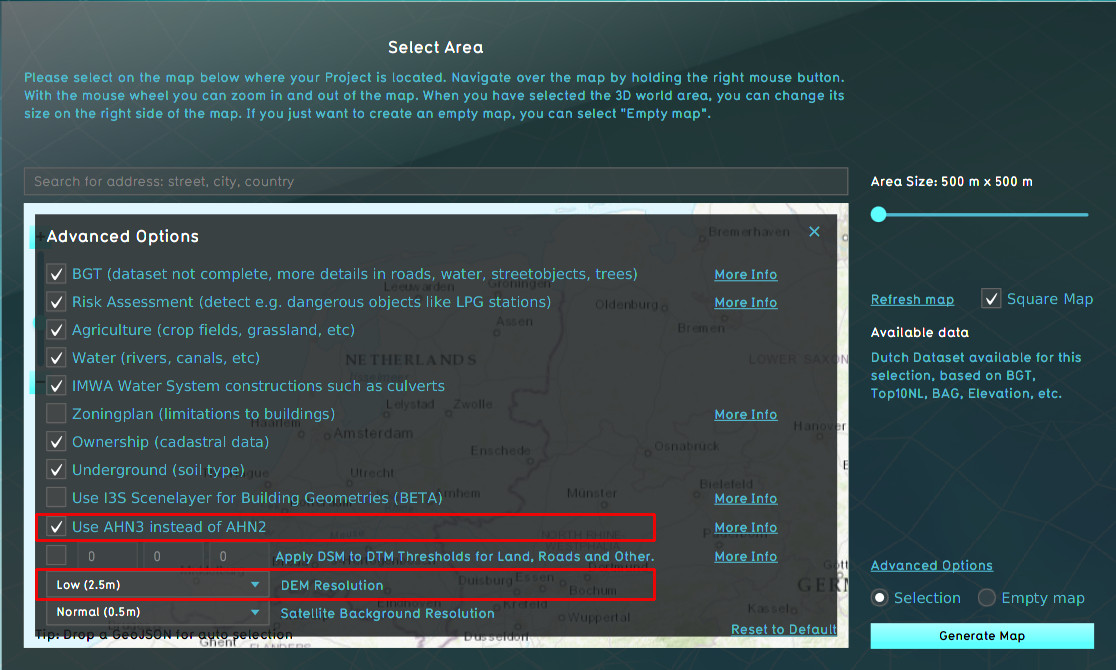 The advanced options allow you to select the used data sources and resolution for the elevation model.

In the Netherlands, the following data sources are used to construct the elevation model:

The DTM is generated as follows:

Using image recognition techniques, the footprint polygon of the Constructions may be split into multiple Construction sections, each with their own polygon. The AHN DSM's average height is then determined per individual section, so that the variability in the rooftops of the Construction can be taken into account.

The resulting Construction heights are not made part of the DTM. Instead, they are stored as properties of the Constructions in the Project.

Water bodies, found in terrain surface types, are lowered a few meters relative to the elevation of the surrounding surface. The following parameters are used:

From the DTM a point is selected at the waterbody's edge, or as close as possible. The Angle of repose value of the underground Terrain Type present in that point is determined. A downward slope is created at the determined angle of repose. The downward slope continues until either it meets the slope generated from the other end, or it reaches the determined default water depth relative to the DTM. This means that thin waterways will not be as deep as their default water depth allows them to be, and that large water bodies are likely to have flat water bottoms.

The resulting terrain height changes are made part of the DTM.

The angle of repose and water depth m attributes determine the slope and depth of the waterway. When the waterway is wide enough, the water bottom will be flat.

Because of the angle of repose, the slopes of a narrow waterway can end in a point, despite the fact that the waterway is not yet as deep as determined in the water depth m attribute.

To improve the water depth with your own data, see:

Elevation model generation (outside the Netherlands)

For the elevation model in projects abroad, the ESRI DTM is used. The resolution differs per location, based on the used data sources for creating the ESRI DTM layer.

The height is stored in Height sectors, which are square 500m x 500m tiles floating point values which store the height data in meters, with a precision of 3 decimals. The amount of points per height sector depend on the DEM resolution configured in advanced options of the New Project Wizard, before project creation, and cannot be increased or decreased later on.

More insight into the elevation model can be provided by adding the Digital Terrain Model Overlay or the Digital Surface Model Overlay, which are grid overlays showing the (average) height per grid cell. The amount of averaging depends on the configured grid cell size.