An area is a surface or plane. It is a 2 dimensional indication of a location, more spread out than a single point.

Areas in the Tygron Platform

In the Tygron Platform, an area is a generic form of data. An area is comprised of a polygon and a number of attributes, which can be completely user-defined. They do not do much on their own, but can be used in conjuction with TQL and Excel to implement more complex and user-defined calculations for a project.

A polygon is effectively just an polygon with a number of attributes. It does not interact or interfere with other components of a project directly, such as constructions, neighborhoods, or terrains. Areas also generally don't interact with each other directly. They can be drawn anywhere in the map, even overlapping one another.

Because areas can be drawn basically anywhere, they can be used for several of these purposes at the same time. Some areas may be drawn to indicate one thing, while other areas are drawn to calculate something else. By using attributes, it's possible to differentiate between areas for different purposes.

Its possible that, during a project, a specific location needs to be checked for the presence of something. For example, a specific type of construction, or a type of terrain. Using a TQL query, such locations can be checked. But to do this, a polygon must mark that location. Because zones and neighborhoods have specific meanings, it may be undesirable to redraw those just to facilitate a query. Areas can be used to indicate a location instead.

Areas can be added to an areas overlay. This overlay can be used to present information to the user. By using areas, the information displayed by the overlay can be directly related to calculations based on those areas. The overlay can also be changed during the session, if the areas change their polygon or color.

In the editor, you can add, remove, and edit areas in the project as desired. To do this, you can used the "Areas" panel from the "Geo data" menu in the editor. 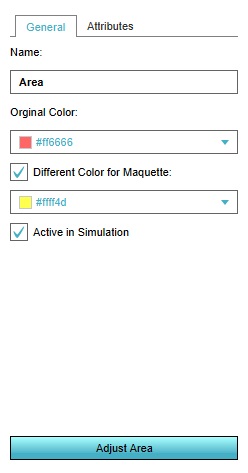 The right panel allows you to edit the properties of areas.

The tabs allow for switching between types of properties.

Areas have a number of general properties.

The field for the "Name".
The name of the area. This is used to differentiate between different areas. If the area is part of an overlay, the name is also used in the legend of the overlay. The name can be changed by changing the text in this field.

The selector for the "Original Color".
The color of the area. When the area is displayed in the 3D world, the area is displayed using this color. You can change this by selecting the color field. A panel will appear in which you can specify the desired color. The color will be available as an attribute as well.

The checkbox and selector for the "Maquette Color".

Whether a different color should be used to display sections of this area which are added during a session. This option an be toggled by checking the checkbox.

When checked, the option for selecting a second color will appear. You can change this by selecting the color field. A panel will appear in which you can specify the desired color. The maquette color will be available as an attribute as well, with a similar behavior as the color attribute.

The checkbox for whether the area is "Active".
Whether the area should be considered active. When an area is not active, it is not displayed as part of overlays, and has no polygon in the 3D world. You can toggle this by checking the checkbox.

Areas can be assigned (user-defined) attributes. Some attributes are automatically created or modified when certain properties of the area are changed.