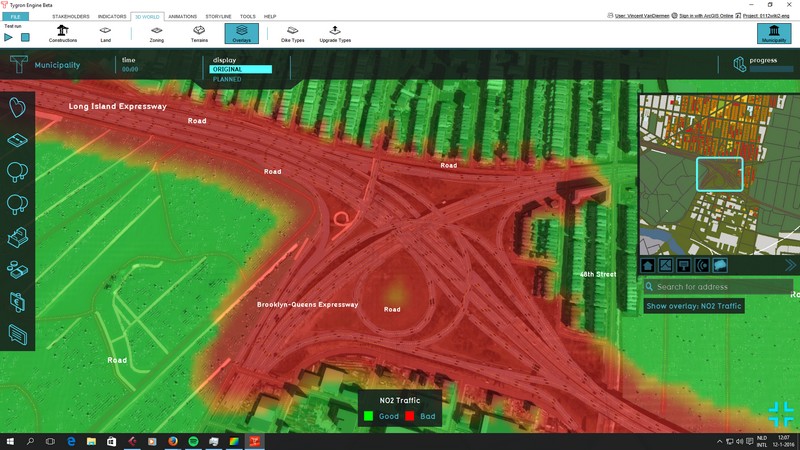 The Traffic NO2 Overlay is a Grid Overlay which computes the impact of traffic air pollution (in μg/m³ NO2) for any given location in the 3D World. The calculation takes into account the amounts- and types of traffic, and the distance from the source of emission. It also takes into account objects and terrain features which would block the travel of particles.

The Overlay only takes into account NO2 emissions from traffic. Other sources of emissions (such as air traffic of factories) are explicitly excluded.

The Overlay implements SRM1[1], which is only applicable for urban environments.

The Traffic NO2 Overlay has a number of options which allow it to be configured as desired. A configuration wizard is available.

The following aspects can be configured:

Traffic intensities for each type of traffic can be based on one of the following:

The traffic intensities can be defined as either a single value or as 24 hours, with each value corresponding to each hour of the day. The intensity used for the calculation is then defined by the HOURS model Attribute.

The Traffic NO2 Overlay performs its calculations based on the Overlay's Attributes, the presence of trees, and the Attributes of roads present in the 3D World. The calculations follow the standard rekenmethode 1 (SRM 1)[1].

The following result types are available as output from the traffic NO2 calculations: