A function is the purpose of a type of building. The term function comes from urban planning jargon, when dealing with zoning plans.

How do functions relate to the Tygron Platform

The properties associated with a Function are known as Function Values

Additionally, Functions can also be used as definitions for actions. When a Function is used as an Action, the Action will be the creation of a new Construction, the Function of which is the Function which is used as Action. Some properties of the Function, such as the minimum, maximum, and default amount of floors, also affect how a Stakeholder can enact their action.

Functions are composed of a collection of properties called Function Values. These form the actual numeric definitions which are applied on a Construction which is set to be of a certain Function. In principle, when such a value of a Construction is required for a calculation, the value set in the Function is used. 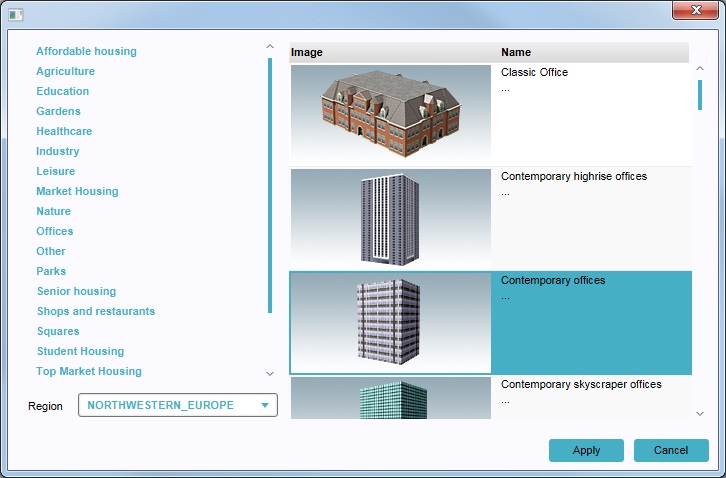 The function selection window. This will appear whenever you need to a select a function.

Functions are always part of at least one Category, but can also be part of multiple functions. An example is a Function for a Construction with shops at a bottom floor, but residences on floors above it. Or flats which contain a mix of both social and luxury housing. In these cases, the Function's Categories each have a respective weight. The Construction will be considered wholly of the specified Function, but the Construction will be considered "divided up" between the Categories when querying, for example, their floor size.

The region selector, to filter the available functions.

To further help with finding the appropriate Function, they are also divided into regions. Based on the location of the Project, the region for the Project is set automatically. Some Functions are only available in certain regions. This is based on what region of the world the Function would be most appropriate for.