This article is a stub. You can help Tygron by expanding it.
Please note: This page is currently being updated.

The following prerequisites should be met before starting this tutorial:

Take the following steps as preparation for following this tutorial:

Networks are a separate data layer in a 3D world, intended to model actual resource transport networks, such as for gas, heat, and internet. They are modeled as a mathematical graph consisting of vertices (points) and edges (lines connecting the points).

Networks are composed of a number of datatypes:

These datatypes form the actual network. However, when discussing networks in the Tygron Platform, the following datatypes are of importance when dealing with networks:

A good way to learn how these items work in tandem is to create a small network in which each of these parts are represented.

Pick a location in your map with a little bit of space. You're going to create a small network in this location. 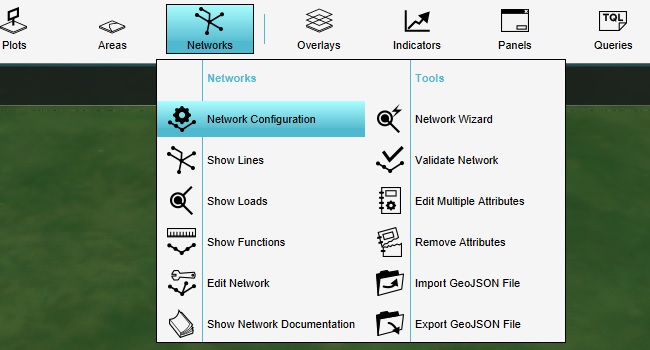 The location of the network configurations. 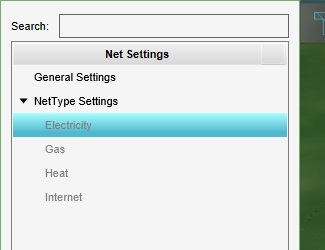 Make sure it's activated in the right panel, by checking the "Active" checkbox. 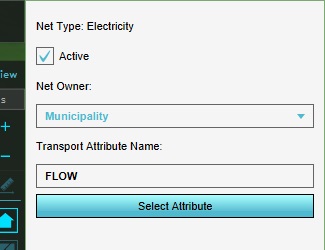 Set the network to be active.

Next, we can draw the network.

The network editing options in the bottom panel.

As you move the cursor, you will see a predicted line in bright yellow, which indicates where the next line will be placed when you click again.

The next potential line is visualized as you move the cursor.

Make the network circle back on itself, letting the last net line connect to one of the intermediate nodes.

If at any point during this proces you place a net line where you don't want one, select the "remove" option in the bottom panel. You can then click on the net line you misplaced to remove it. Then, you can switch the setting back to "Add" to resume drawing new net lines.

Click on the "Add" radio button in the bottom panel to "unfocus" the cursor from the current drawing action. Then click on any node to focus the drawing action there, and create a small offshoot from the network. Repeat this process a few times so the network has a couple of endpoints.

A relatively simple network with a few offshoots.

This series of net lines together form a very simple network. However, right now the network is just a collection of lines between points. The next step is to add net loads, the set of definitions which indicate what happens at a given endpoint. 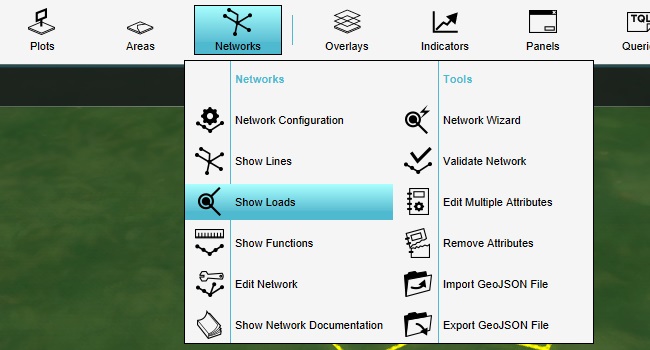 The location of the net loads editing option.

Add a net load to the project. 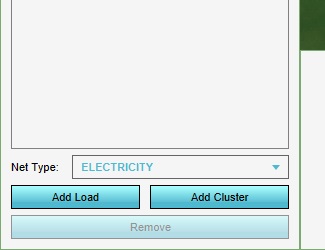 The net load will be grouped in the "Unclustered" category, and then the "Electricity" network category. Select it. 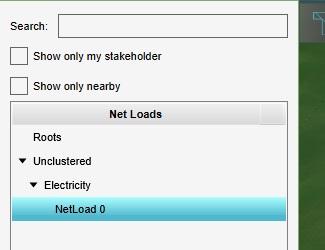 The net load can be selected in the left menu.

The net load has been created, but it must be connected to a valid endpoint on the network, and it must be given attributes which for the definition of what happens at that endpoint.

First, we connect the node to an endpoint. Select "Select Node" at the bottom of the right panel. 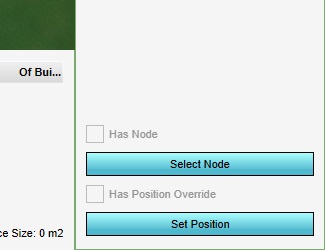 The options to relate the net load to net nodes, and to geographical locations.

Next, click on the first endpoint of the network. You will see the load is placed on the exact same location of the net node you clicked on.

Click on the endpoint to connect the load to it.

The net load now has a different location than the net node.

Notice that the network itself is unaltered. The net lines as we have drawn them are still the same.

Now that the net load has been associated with the network, attributes must be added to it to define its effect on the flow of the network. Switch the right panel to the "attributes" tab, and add a "FLOW" attribute with a value of 1000. 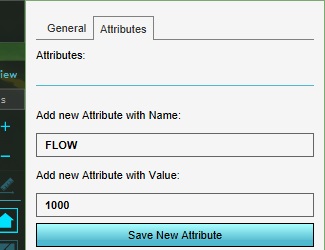 Add a "FLOW" attribute to the net load.

This net load now defines the connected net node to be a point of resource production. In terms of an electricity network, this would for example be a power station.

Add 2 more net loads to the project. Give them a "FLOW" attribute of -100, and connect them to different end-points on the network. 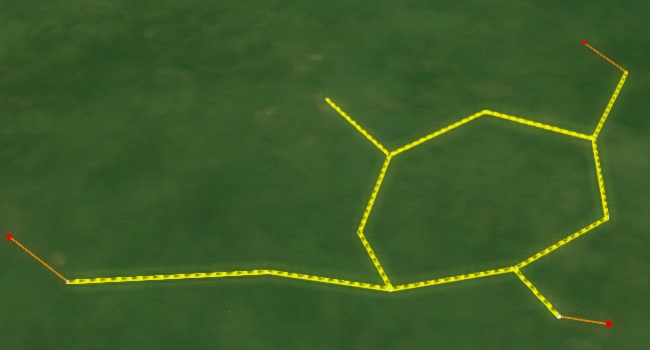 The leftmost net load is a "producer". The other net loads are "consumers".

Because the net loads have a negative "FLOW" attribute, their associated net nodes are points of resource consumption. In terms of an electricity network, this would for example be a house, or a factory.

For each net load, change the timestate from "NOTHING" to "READY". 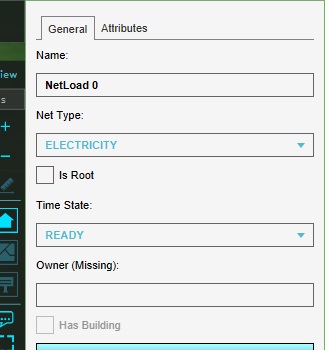 The timestate setting dictates whether the net load is active or not.

Lastly, we need to set a "root" for the network. This is a net load which serves as a sort of anchor for calculations. By convention, if a network only has a single producer it is usually set as root.

Select the producer net load, and in the "General" tab make sure "Is Root" is checked. This sets this net load as the root of the network. 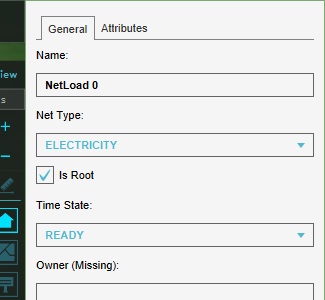 The "Is Root" setting anchors the network at this net load's net node.

It will now also be listed in the left panel under the "Roots" category, rather than "Unclustered". 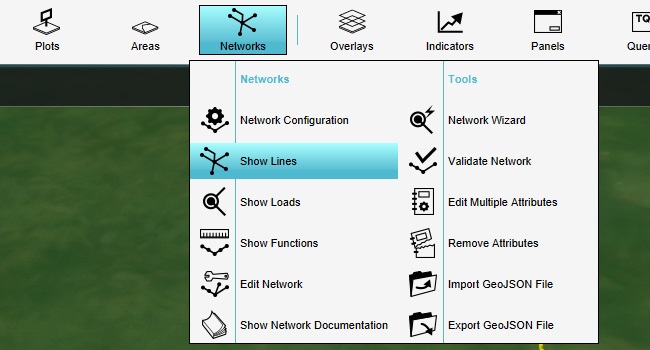 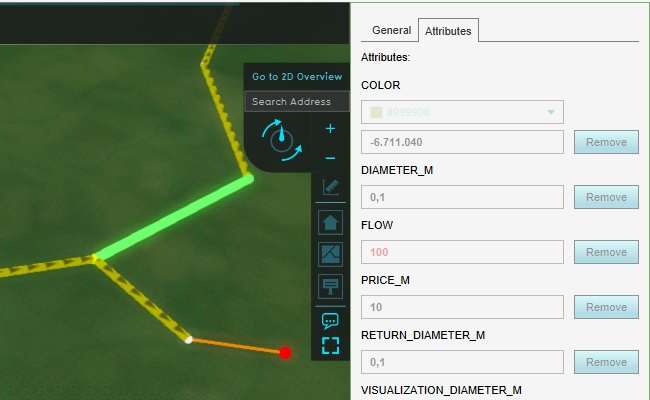 This forms the basis of simple, manual network creation and configuration.

These assignments guide you to further explore the basic calculation functionality already exposed with a basic network.

Creating a network manually is only rarely the preferred situation, especially when dealing with larger project areas. For these situations, the Tygron Platform also offers a wizard to generate a complete network automatically.

The network wizard will open in a separate window.

The wizard will guide you through the process, but during the generation process a number of questions will require your input. For any question posed without an explicit instruction listed here, simply use the default settings.

One of the first questions posed is which network type to edit. Select the "ELECTRICITY" network, and opt for "Clear Network" (including the Root Load). This will delete the entire network as it had been created so far. 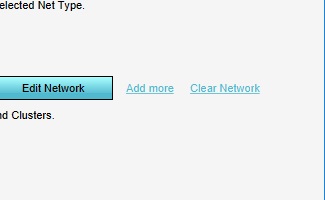 Then opt to edit the network of the "ELECTRICITY" network type.

Opt to edit the network type.

When prompted, opt to generate a (new) set of net loads.

Choose to generate a new collection of net loads.

When prompted, select a neighborhood in your project with residential buildings.

Select the residential projects in your neighborhood.

When prompted, select all stakeholders. 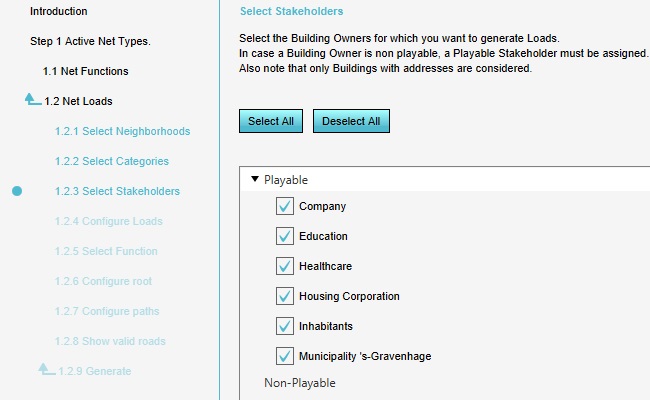 By default, one of the selected options in the wizards is to simultaneously create the paths connecting all the net loads. This will automatically enable a number of additional wizard steps to perform this process. Make sure this options is still checked when continuing past the screen with this option.

Make sure this option is checked.

You will be prompted to place the initial root of the network somewhere in the 3D world. Opt to draw the root load in the map (and to switch to the 3D View to perform the action).

Click in a location in the 3D world to place the root load there. Preferably, place it near the edge of the residential neighborhood. 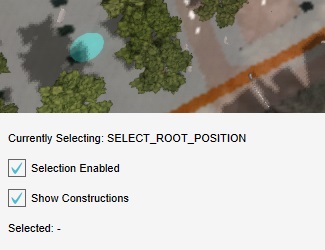 The root placed in the 3D world by clicking there.

Finally, you will be prompted to initiate the actual process of generating the network. Click on "Generate" to begin this process. 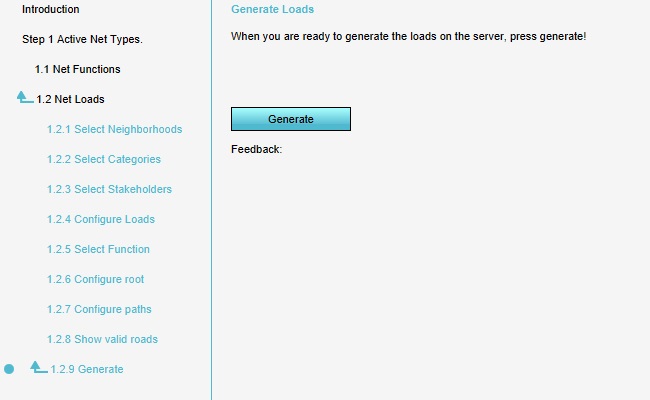 After the generation process has completed, you will be able to finish this step of the wizard.

Finish the network generation step of the wizard.

The results pass through a validation step. If everything went well, it should report that the network is valid. However, it is possible that the generation algorithm has caused a few minor errors, such as a few loads placed in locations where the network cannot reach. In these cases, the wizard will ask how to fix these issues. For the purpose of this tutorial, it is sufficient to opt to delete any erroneously unconnected sections.

The wizard will validate that the generated network has no errors.

This concludes the generation of the network itself. If you minimize (not close) the wizard window, you will be able to see the network in the 3D world. 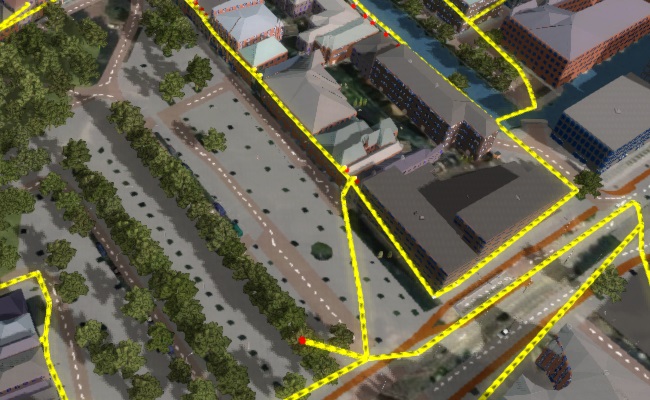 Finish the network generation step of the wizard.

Next, the wizard can guide you through the generation of the associated clusters for the network. Opt to generate clusters.

Opt to generate clusters for the network's net loads.

When prompted, select all stakeholders. 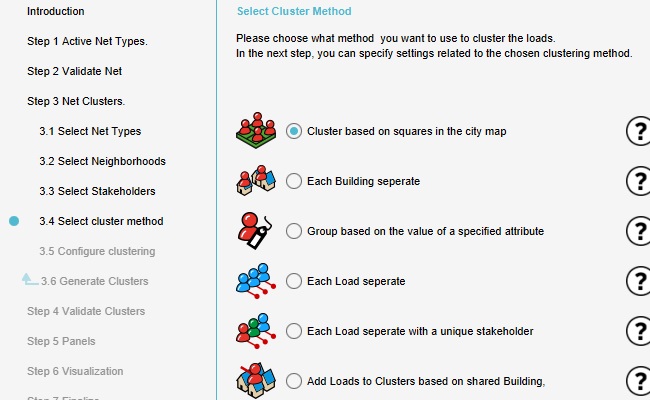 Finally, you will be prompted to initiate the actual process of generating the clusters. Click on "Generate" to begin this process. 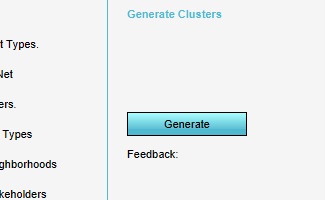 After the generation process has completed, you will be able to finish this step of the wizard.

Finish the cluster generation step of the wizard.

The results pass through a validation step. If everything went well, it should report that all loads in the network have been clustered. However, it is possible that the generation algorithm has caused a few minor errors, such as a few loads which have not been clustered. You will be informed that these net loads need to be removed from the project. In the editor interface, open the list of all net loads, and remove all net loads which are still categorized in the "unclustered" category. 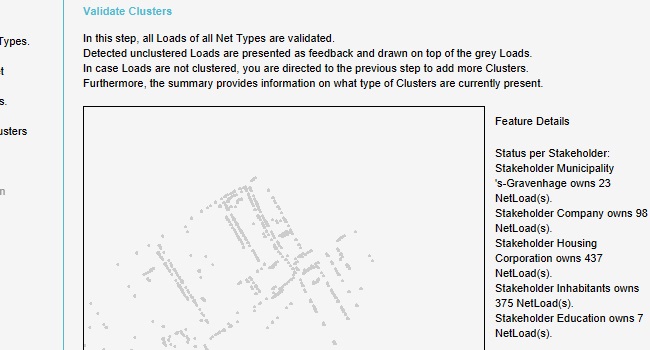 The wizard will validate that the generated clusters provide full coverage of all net loads.

Now that the clusters have been generated, the potentially hundreds or thousands of net loads in the project area have been grouped in at most a few dozen clusters. These collections of net loads allow a large number of net loads to be controlled en masse. The wizard will offer to generate a set of standardized interaction panels to allow this control.

Opt to generate panels to control the clusters.

A new template panel will be created. This requires no further work to configure.

Continue through the remaining steps of the wizard and complete it. The wizard window will close and you will be returned to the 3D world. 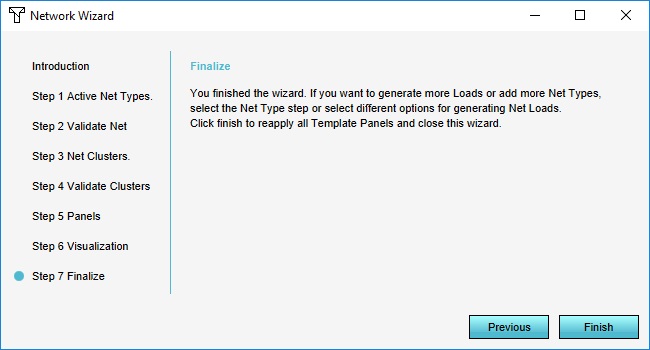 The wizard is now finished.

Feel free to look around the 3D world and see how the network has been generated.

Take note of the cluster symbols which have appeared. 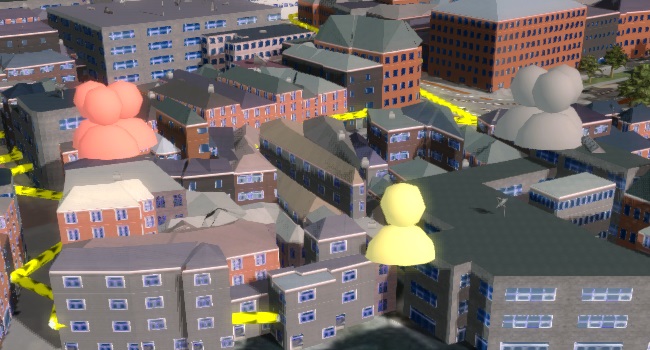 Symbols in the 3D world indicating the presence of clustered net loads.

These mark the locations of clusters of net loads. They consist of one or more colored figures. The quantity indicates whether the cluster should be considered a clustering of individual connections, or a single connection serving multiple addresses. The color indicates which stakeholder owns the cluster.

Find a cluster, and switch to the stakeholder associated with the cluster.

Switch to a stakeholder who owns a cluster, such as a housing corporation.

You will see a popup is available in this stakeholder's perspective, associated with the cluster. 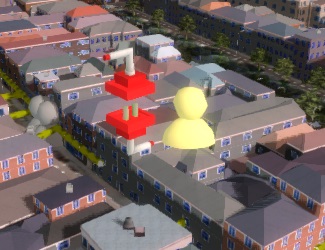 The popup serves as a way to control the cluster.

Click on it to open the panel related to the cluster. 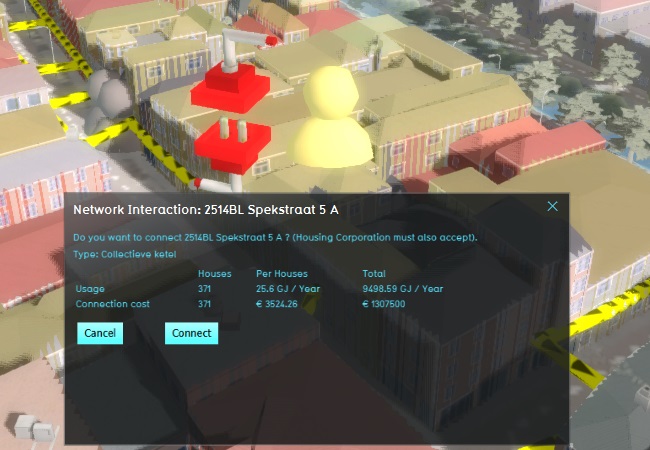 The panel to control the cluster.

It will display some basic information on the connections which are grouped together in this cluster.

Close the panel for now.

Interacting with a generated network

You will notice that the entire network has disappeared at the start of the testrun. This is because one of the default settings in the network wizard is to generate the network in the timestate "NOTHING", meaning all (consumer) net loads begin as disconnected.