A PhD candidate at the University of Twente was assigned to create a serious gaming environment for river interventions as a tool that facilitates stakeholder engagement. The research was one among 15 projects as part of the RiverCare research program. The researcher is a human-centered interface designer, and is not an expert in river interventions. After developing and testing several prototypes, the researcher created the virtual river game, a unique board-game that is digitally connected to the Tygron platform. To simulate river interventions, players can move the pieces on the board, and immediately see the changes on the Tygron screen including the new map, as well as numerical calculations and graphs corresponding to the board changes. 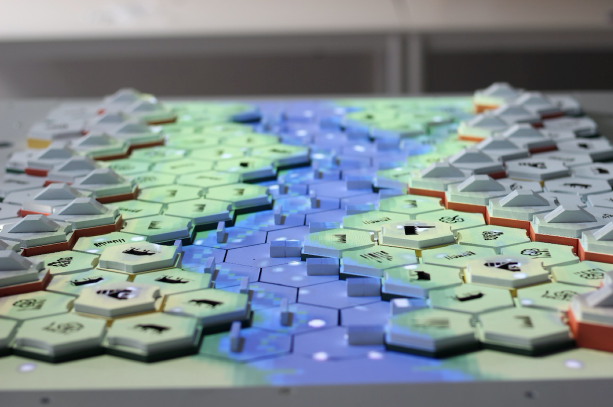 The board component of the Virtual River Game, (Photo: Ryan d’Souza)

Background of the researcher

The main objective of this research was to create a virtual game that allows players to interact with an imaginary river section.

The game would allow different stakeholder groups to:

To do that, the researcher was expected to:

The research was developed based on a need-driven approach, therefore it consisted of: 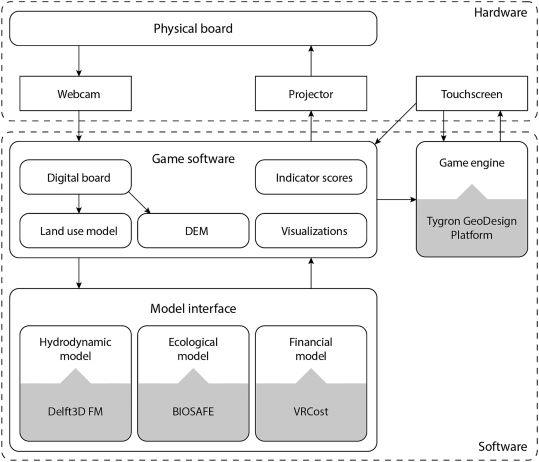 As mentioned earlier, the researcher did not have any prior knowledge in rivers, coding or the Tygron platform.

That is why it is important to mention those who have helped the researcher create the river game: 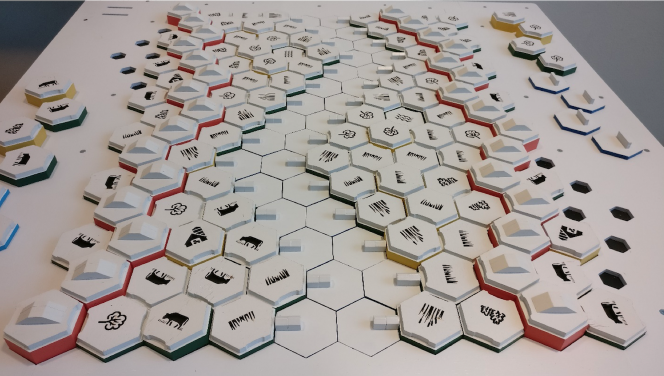 The physical game board of the Virtual River game as a representation of a Dutch river segment. 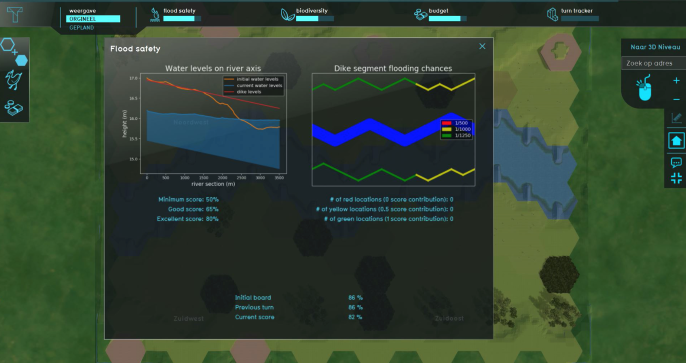 Making the Board Game

In a later stage, the researcher dedicated a mini desktop computer for the game. That is because during that time, Tygron was still developing its water module, so as mentioned earlier, the researcher used the Delft3D model from Deltares which was CPU intensive.

It is important to mention that: 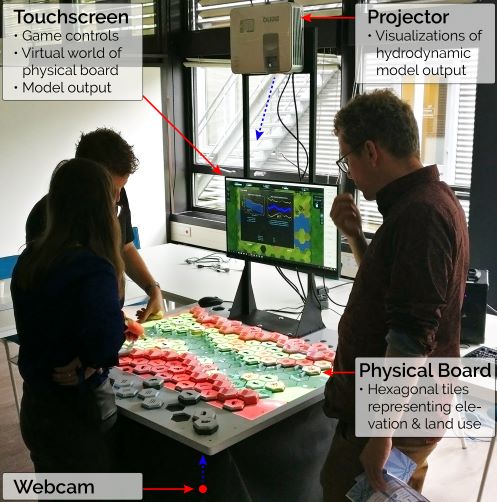 The physical set-up of the virtual river game including the physical board, touchscreen monitor, projector, and webcam. (source: The Virtual River Game)

The outcome of the research

The final outcome of the research was a physical game board that represents a fictional and abstract part of the Dutch river.

About the Virtual River Game

As mentioned at the beginning of this use-case, the outcome of the research was already envisioned from the start: To create a virtual river game.

The researcher had in mind the possibility of creating a game that is a combination of physical and digital, however, that was not predetermined.

In the initial prototypes, the researcher worked on translating real river locations into the board, focusing on the rivers on the east of Nijmegen in the Netherlands. Those prototypes were simple and made of paper, but with a computer game (in Tygron) in mind.

However, for the final prototype, the research team extracted the characteristic of a typical dutch river, such as its width, slope, depth, height of the levees, etc. and used it as a representation in the game. That being said, the virtual river game is not a representation of a real location.

The Analogue Game Board

The researcher explains further about the Virtual River Game in the two videos below:

Video 01- An introduction to the virtual river game 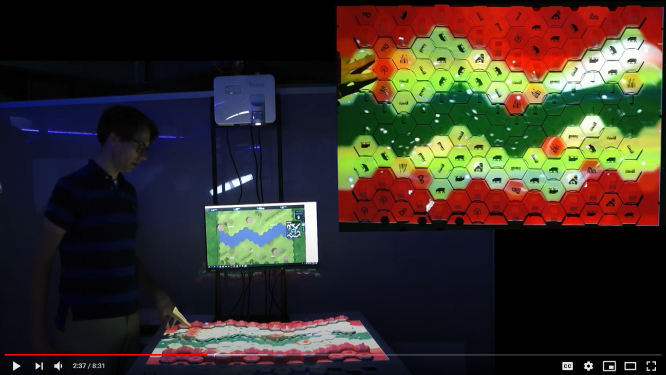 Video 02- Explanation of the visualization and how the interventions work

In this research, once the prototype was playable, a baseline was created and discussions finally started.

For more information about this PhD research, you can contact us at: info@Tygron.com

You can also contact the main researcher Robert-Jan den Haan, researcher at the University of Twente at: r.j.denhaan@utwente.nl