What are net loads

A load, in network simulation terms, is a supply or demand on a resource transport and distribution network. Such a network is composed of nodes connected by lines, in which the nodes with supply or demand are known as load nodes. Based on the supply and demand of various nodes in the network, it is possible to calculate the amount of resource flowing over the various lines.

How net loads relate to the Tygron Platform

In the Tygron Platform, a net load is a definition of supply or demand which connects to a net node to turn that node into a load node. A net load does have a geographical location in the 3D World which may be different from the net node is belongs to. Loads can be imagined as being the (geographical) destinations or origins of resources such as gas or electricity for GAS and ELECTRICITY networks respectively, while the net nodes and net lines form the extent of the distribution network.

Net loads have a number of properties related to their effect on the network. They also allow for the definitions of arbitrary attribute.

The name of the net load is generally not visible to the end user, but can be used to keep track of specific net loads while editing, or could be called up using TQL to display more information to an end user.

The network type this net load belongs to. Each net load can only belong to one type of network.

The root net load indicates a reference net node or origin within the distribution network. Depending on the use-case, the root net load is often a resource supplier, although the net load can have any value for its supply or demand of resources. The Tygron Platform's built-in algorithm for generating networks requires that a root net load is present. This property is also signified by the ROOT_LOAD attribute.

When requesting the time state of a net cluster, the furthest progressed time state among all net loads in the net cluster is returned.

Net loads can have any number of arbitrary attributes. The following attribute names are reserved and have a special function.

FLOW: The flow of a net load indicates the quantity of supply or demand that this net load represents. Positive numbers indicate a demand, and negative numbers indicate a supply. The flow is not a fixed property, but should be added to the net load as an attribute. By default, the attribute name FLOW is preferred. The specific attribute name used for this is defined as part of the settings of the net type. "FLOW" is the default attribute used to indicate this property, but any attribute may be used. Depending on the calculation model for networks, this attribute is used in resource flow calculations.

It is possible to add and edit net loads manually, but also to import net loads into the project.

It is possible to define each net load manually, using the built-in editing options. 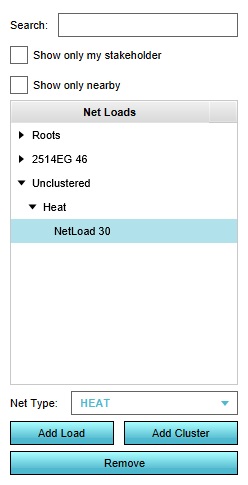 The left panel for net loads in the editor.

In the overview of net loads, all net loads are automatically displayed grouped into their net clusters, or into the groups "Roots" (for root loads) or "unclustered" (for loads which are not part of a cluster). Within these clusters, the net loads are then grouped by network type (i.e. HEAT, GAS, etc).

How to add a net load:

How to remove a net load: 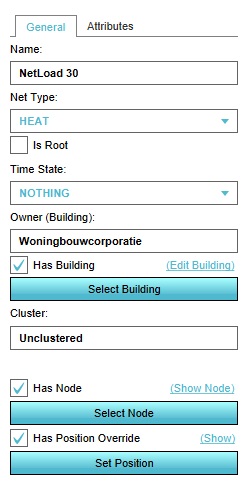 The right panel for net loads in the editor.

The name of the net load. This is generally not visible to the end-user. You can change this by altering the text in the "Name" field.

The dropdown menu for the "network type".

The network type this load belongs to. You can change this by selecting a different network type from the dropdown menu.

The checkbox for whether this is a root load.

The dropdown menu for the "time state".

Whether or not the net load is connected, or in what step of the process this load resides. You can change this by selecting a different time state from the dropdown menu.

The "Select Building" button, and the checkbox to disconnect from a building.

A load can be associated with a building. To do this, select "Select Building", and select a construction in the 3D world. To remove the association with a building, uncheck the "Has Building" checkbox.

The "Select Node" button, and the checkbox to disconnect from a node.

A load can be associated with a node. To do this, select "Select Building", and select a node in the 3D world. To remove the association with a node, uncheck the "Has Node" checkbox.

The "Set Position" button, and the checkbox to remove the override of its default position.

It is possible to import a geojson file to add net loads to a project.

It is also possible to select the option of importing data in the Net wizard. In both cases, it is recommended to import all network geojson files at the same time where possible: net lines, net line definitions, and net loads.

The net loads GeoJSON file should be composed of point data with the following attributes.